Buying A New Duplex As A First-Time Home

Many potential homeowners don’t consider purchasing a duplex as their first home.

However, if you’re smart when making a purchase, a duplex might be an affordable option to own a home in a preferred location or make it a real-estate investment where you can occupy the home before selling it off in the future at a profit.

This guide outlines the meaning of a duplex, how it’s advantageous for first-time homebuyers, and the potential drawbacks you need to consider before making a purchase. 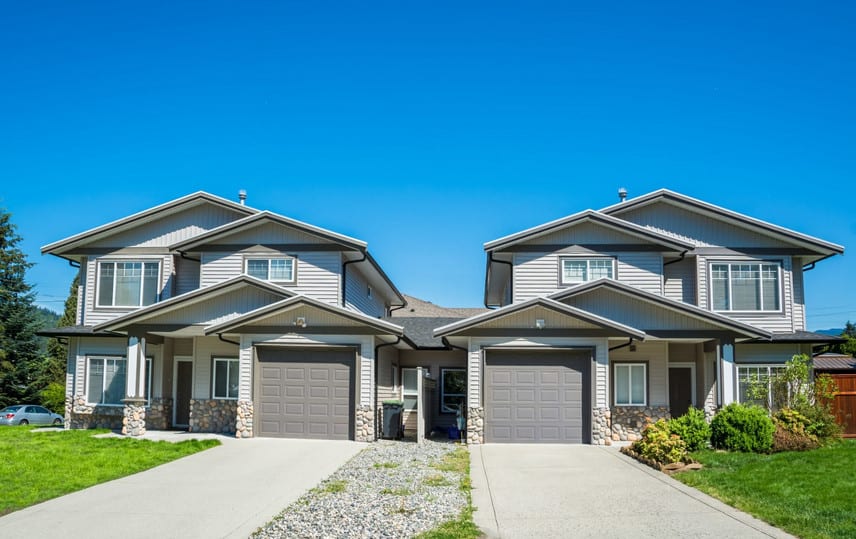 Generally, a duplex can be described as a single house built on one piece of land but is constructed to comprise two homes.

Basically, the two private homes look like mirror images of each other with respect to the layout, especially when they’re built abreast each other. In traditional duplexes, the homes usually share the central wall.

Duplexes are categorized somewhere between apartments and detached houses. Each home in a duplex features its own kitchen, bathroom, driveway, and entrance.

However, a duplex isn’t a freestanding structure. Unlike apartments, you only share the central wall with a maximum of one neighbor.

The address of the two homes in a duplex often features the same address. For instance, one home in a duplex may have an address such as 64A whereas the other home may have its address as 64B.

When Purchasing A Duplex, Do You Buy One Or Both Homes?

While duplexes are built together, they’re not always sold off as one whole unit. The title of the house determines whether you’ll purchase one of the sides or both homes.

The layout used may affect its resale value and rental potential. Some common floor plans for duplexes include:

This is a less common duplex floor plan. In stacked duplexes, each home has a private floor space, but both homes share one ceiling/floor such that one duplex sits on top of the other duplex.

Both entrances are often built to face the street. However, the top home is accessed through internal stairs.

2. Back to front floor plan

In this configuration, the two homes making up a duplex are built in a way that one home sits behind the adjoining home.

3. Side by side floor plan

This is the most common duplex configuration, whereby two homes are built abreast each other.

Both homes share a central wall. Most buyers expect to invest in this duplex floor plan, making it easier to rent or sell.

Can I Use a First Homeowner’s Grant to Purchase a Duplex?

While it’s possible for a first-time homebuyer to purchase a duplex, you should ensure you meet the eligibility criteria for a first homeowner’s grant.

In most states, the grant is only applicable to new homes. Some states allow existing homes to be renovated and become eligible for the grant.

In most states, you can’t use a grant to buy existing duplexes unless they have never been occupied.

If you qualify to use a grant, you should live in your newly bought home for six or more months before you use it for investment purposes.

Alternatively, you can purchase a newly constructed home or build one from scratch and customize it the way you want.

Duplexes come with several benefits for first-time homebuyers. Here’re some of their advantages:

1. Live in the desired location

As a homebuyer, your wish is to own a home in the best location. For instance, you probably desire to reside in a suburb but don’t have enough money to build a home in such a location, you can still purchase a duplex at a lower cost.

Essentially, it costs about half to purchase one side of a duplex when compared to building a new home.

However, buying an entire duplex may cost about the same as building a freestanding house.

A duplex with a strata title can be rented. You can choose to live in one of the homes and rent the other side.

Alternatively, you can rent both homes in a duplex to get more income from the same piece of land.

Thus, duplexes are appealing in the sense that you can become an investor and occupier simultaneously.

No matter where you’re buying a home, you can cut the cost by buying a duplex. That way, you can own a house earlier either by cash or by taking a small home loan.

This is especially possible when purchasing one of the sides rather than the entire duplex block.

Thus, you’ll own property with more value, especially if you’re buying a duplex in a location where the land value is likely to appreciate with time.

By buying one side of a duplex, it means you’ll only be responsible to maintain half of the house. Consequently, you’ll only clean your floor and maintain a smaller lawn.

Also, you’ll only handle fewer repairs. However, if you buy the entire duplex, you’ll have more maintenance work to do.

Duplexes offer more privacy when compared to apartments. With apartments, you won’t have the yard to yourself.

Also, you may have neighbors surrounding all sides of the apartment. Luckily, you only share much of the space with just one neighbor when dealing with duplexes.

If you’ve bought just one side of a duplex, you can claim some tax deductions for expenses like interest payments or repairs. Some shared costs, like building insurance, may get written off.

Disadvantages of Purchasing a Duplex

Besides sharing a wall, owning one side of a duplex means that you’re also sharing the foundation and roof.

Not unless you own the entire block, you’ll get shared insurance for the building with your neighbor.

You should have an agreement with your neighbor on how to do repairs that touch any shared parts of the building.

Since you’ll be sharing the roof and wall of the duplex with your neighbor, you might have to deal with certain issues such as a noisy or messy neighbor.

Also, if you own the entire block but have rented the other side, then you might have to deal with problematic tenants.

If you’re planning to do some renovations, you might have to seek permission from your neighbor before going ahead with the project.

If your neighbor declines, then you’ll have challenges to do the renovations. Thus, the kind of a neighbor you’ll have will largely determine the kind of life you’ll experience in the duplex.

In most cases, you may not have control over the kind of neighbor you’ll have. Regardless, you can try to meet the neighbor before buying the duplex.

If you want to rent one of the sides of the duplex, choose the tenants carefully to avoid problems with them.

If you’re owning one of the sides and renting the other side of the duplex, you can write off some tax deductions meant for the rented side.

However, in case you decide to sell off the block in the future, you may get hit with a huge capital gain tax. The tax is based on the profit you’ll earn from selling off an investment.

There’re several risks that come with renting a property. For instance, you should be sure that you’ll get tenants if you want to rent out part of the duplex.

However, you might not be guaranteed of getting tenants.

What to Look Out For When Shopping For a Duplex

In conclusion, whether you want to buy a standalone home, duplex, or an apartment, it’ll help to get a loan to make your first-time home purchase easier. Also, consider loans with low-interest rates to make it easier to repay the loan.

A Guide for Buying Your First Home

We are experienced in building quality new homes. We can design & build custom homes that are individually designed to your specific requirements. We ensure all our new homes are built to a high quality by focusing on quality material & reliable team.